What I Learned Running a Convention Table

This past weekend I got to try my hand at running a convention table for this year’s Anime North and while the preparation of the event was tiring, it was all worth it in the end. That being said, things for the Sproutli Games table didn’t start out the greatest and only through quick modifications and reworks was the table able to run as spectacularly as it did. Allowing us to meet so many great fans of our games!

Since the outlook of the table pulled such a dramatic improvement this year, I would like to share some of what I learned so that others can try to run the best con table possible. 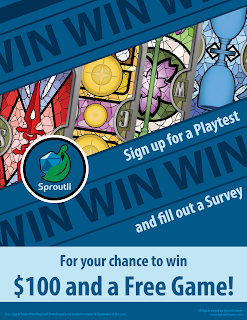 I have this one up right in the first spot because I believe it is the most important and honestly the most under-utilized point on this list. Convention attendees are busy people, who have a lot to see and do over the span of a weekend. Why should they spend time at your table when there are literally tens if not hundreds more for them to check out.

This is why it is so crucially important to run a form of event, raffle or hook to get attendees interested. Once they have a reason to stop, they are much more interested in what you have to say. The more you are able to give to convention attendees the more traction you will be able to get in the long run.

2.  Investigate Prior to Organizing Your Table

This one is a little tricky to explain as it can vary widely from convention to convention. At the convention we attended there were 2 areas we looked into that ended up paying off substantially.

The first was inquiring about discounts or bonuses for running events or panels at the convention. This was a massive one for us, due to the fact that we were running playtests for Trials of the Magi for the majority of the weekend. With all the events we planned on running, we were given five additional free tables! In addition to that I was able to get my ticket for free, because I was going to be running a panel at the convention. Depending on the convention the amount of panels needed to get a free ticket can vary, but almost every con I have been to has offered some kind of similar deal.

The second thing to really look into is whether or not, the convention you are attending allows you to pay by trade. All this means is that the con allows you to pay for your table by giving away free stuff to the convention and it’s attendees. This can be a great way to merge the cost of table promotion and the base table cost into one much cheaper value. Some of the best ways to do this is to give out free samples, or give out some sort of prize via raffle or event. Another good go to is to give out free candy to anyone who passes by your table [generally a great way to draw in people].

3.  Convention Staff Are There to Help, Use Them!

When we arrived at the convention for setup on the Friday we found that our table was placed right behind a massive trailer truck located in the furthest corner of the hall, which was literally one of the worst possible locations in the convention. With our table so reliant on getting attendees to join playtests, this location would have ruined us. Luckily when we talked to the convention staff, they understood the predicament we were in and did their best to remedy the situation.

This resulted in a relocation to a much better location, and an awesome amount of support over the weekend. In short, the staff are great people and are just trying to run the best con possible for everyone. But it is important to keep in mind how you treat the staff, the nicer the better. It makes it much more likely that both parties get what they want, and you can makes some awesome friends and get insider tips about the convention. 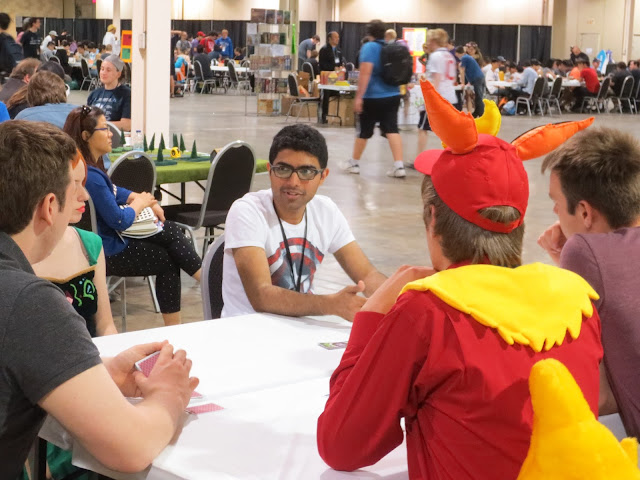 Running a convention table can be a very chaotic experience, and organizing events can only extenuate that. As such it is important to make plans for all manner of outcomes. What if no one wants to sign up for your event? What if your events are overflowing? What if you are so busy that you are unable to leave the table?

These are all questions you should be asking yourself prior to the convention. I hate to bust out a cheesy line like this but… Failure to plan, means you’re planning to fail.

5.  Get More Help Than You Think You Need

Conventions are hectic and crazy events that will have a constant stream of attendees passing by your tables. The quantity of people alone will often be too much for a single person to handle. Not to mention having to set aside time to eat and see the con for yourself. This means that in most cases you will need to have other friends or employees helping you out with your table. 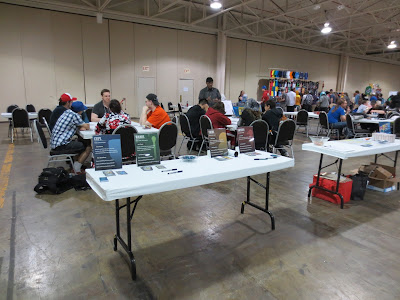 Luckily enough conventions will almost always have a cost effective method for table owners to purchase more tickets for helpers.

Having a table is a great way to meet fans of your product and can be such a rewarding experience to run. It may be challenging, it may be exhausting, but ultimately it is a time for you to give back to your fans and encounter new ones. So enjoy it!